Slovenia: Hiking and Climbing to Brana


Weather forecast was great and the result was another hiking trip with Nada, again with events of climbing. Our chosen mountain was Brana and our climbing part was "Zgornji steber s šijo Brane", (IV-/II-III, 160m + 200m), an upper pillar on the eastern side of mountain Brana with the Šija ridge.

The access was quite long, since we had to ascend 1200 meters, but it was worth it. We had a nice and easy climb in the end, with a finish beer at the "Kamniška koča na Kamniškem sedlu mountain hut" and a night descent back to the valley. 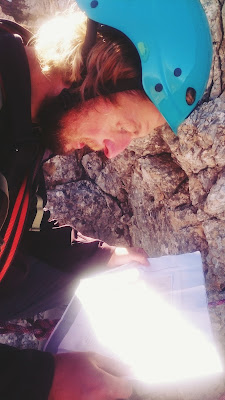 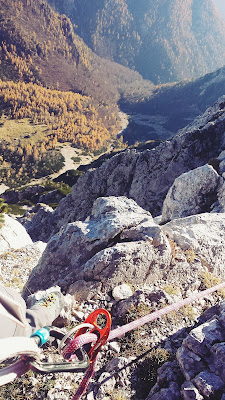 
Whole day of hiking with events of mountaineering


My backpack has many things inside and one of them is a meat pate called Gavrilović. It has been with me for a very long time and has made many vertical meters, so today we decided to eat it. We gathered on a morning hike to Sveti Jošt nad Kranjem, 845 m and there we had a big breakfast. In the end, the pate was lucky, since we had so many things, that I just put it back in to my backpack.

GeoCache found:
- Krokodil, GC1F9GF, where I left trackable item "Travel Pirate Geocoin", TB5D2YM and made a visit with "P Wee the penguin", TB33C54.


For today, Nada and me decided to go in the mountains and try more adventurous thing, hiking with a taste of climbing, graded UIAA II-III) . Our main destination was Na Možeh mountain ridge with 4 like looking peaks (each is called Mož = Man), the highest being 1784 meters high. Relatively hard accessible peak has lovely view to middle Karawanks. The most beautiful are Palec, Vrtača and Begunjščica. To the north is Drava valley and to the east are Košutica and Košuta.

Hiking and mountaineering trip with Nada was a total success.

In the evening we watched a climbing movie Nordwand, based on a famous 1936 attempt to climb the Eiger north face, the film is about two German climbers (Toni Kurz and Andi Hinterstoisser)involved in a competition to climb the most dangerous rock face in the Alps.


In the evening, Nada and me went to see the climbing competition, that took place in "Dvorana tržiških olimpijcev".


We have been doing hikes in the morning for quite some time, but we never made an international one, so it was time to do that too. Rok, Grega and me decided to conquer Lokovnikov Grintovec, 1809 m. We started at 2 a.m. from Slovenian side, below the peak we missed the trail a bit and we also enjoyed on the first snow this season. We came back at 6 a.m. and went straight to work.

Our cycling story continued for the 2nd day (read 1st one in 13302) and our cycling group extended for one person, Maja. After the morning tour of the medevial Motovun city we continued towards Poreč. After almost 40 km and only one flat we arrived to our destination, just before it started to rain.

The last part of the trip was to get Nada back to Schengen area. We didn't have any issues so we all came back home with many new nice memories.


The Parenzana or Porečanka (also in Croatian: Porečka; also in Slovene: Poreška; Italian: Parenzana) is one of the nicknames of a defunct narrow gauge railway (operating between 1902 and 1935) between Trst and Poreč (at that time Parenzo, whence the name Parenzana), in present-day Italy, Slovenia and Croatia.

We started in Kozina with a huge delay, since Nada couldn't find her documents. In the end she left without them, since we rely on a fact, that we will be crossing the borders with bicycles, so they won't check us at all. We descended to Trst over Glinščica valley to the start of the railway. In Trst we got a bit lost, but we soon found the right way to exit the city and then we just followed the marked ex-railway. 2 border crossings were behind us, but they were easy ones, since there was no control on them (Schengen area), although there could be some, due to immigrants issue in Europe.

Our track led us to Lucija, where we stopped for a drink and some food. Later we passed by the Sečovlje Salina Landscape Park to the real border crossing, but as we expected, they didn't check us. We continued to Croatian side and the nicest part began, the asphalt changed to gravel, no traffic and nice scenery. We enjoyed all the way to Motovun, where we already rented an apartment for an overnight stay and 3 more girl, Meta, Tanja and Maja joined us.


Technical data of the Porečanka: