Today's biggest event was a basketball game Slovenia - Croatia. We are always big rivals with our neighbours, so this match is always important to both nations. Croatia started the game much better. At half time it was 39:44 for Croatia, but we were already 8 points behind.
Second half was much better for us. We even the score on 44 and with the help of the fans, our team won in the end with 91:84.
After the game we went home and we prepared everything for the barbecue.
Burcu's mother prepared Sis kebab, Kofte, some lamb meat and many other things. It was delicios. And off course, we had some Cabernet Sauvignon with the dinner. 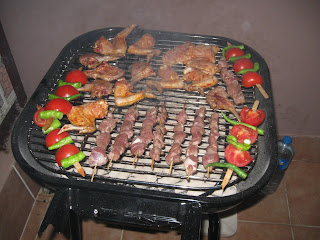 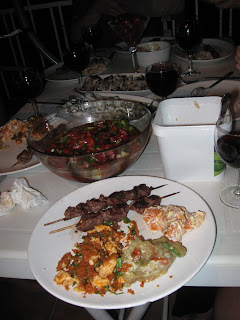 Today we went to the seaside. We wanted to rent a pedal boat, but we didn't have any luck so we had a breakfast on the beach.
In the afternoon we visited the next match. Slovenia - USA. 500 times bigger country hardly won 99-77.
On both sides, there were many mistakes and all we can say now is, that USA team can definitely lose a game.
At home, we prepared some nice sandwiches and a Jagercola. We again watched Turkey. They easily beat up Russians. 65-56 was the final score.
Posted by Tuši at 12:45 0 comments

It was time for first basketball match. Our plan to win the game was achieved.
We won the game against Tunisia 80-56. Our best scorer was Goran Dragić, 24 year old guy from Ljubljana, who is currently playing for Phoenix Suns. After the game we went into the Soccer bar, where we also watched the game between Turkey and Cote d'Ivoire. Turkey easily won 86-47.

Today's results can be found on FIBA page.
Russian girls dancing on Golica.

Burcu and me picked up the tickets for Basketball World Championship 2010, Preliminary group B, where Slovenia, USA, Croatia, Iran, Brazil and Tunisia are playing.

In the evening we had a nice dinner with some nice wine.

It was time to visit Fenerbahce - PAOK match. Burucu got the tickets for us (Ana, Spyros, Burcu and me).
First match in Greece was 1-0 for PAOK, so Turkish team had to win at least 1-0. They scored in second half, but unfortunately only once, so teams had to play extra time. In extra time, PAOK scored, and the whole stadium was unhappy.
So the match ended 1-1 and PAOK advanced. At the end we tried to make some photos of the PAOK fans and we got into troubles. Some Fener fans wanted to beat us up, because they suspected we were not Fener fans. So we got out of the stadium (the guys followed us) and we waited some time with some policemen. One guy then came and asked the Police if we are Greek. He just got the answer, what if we are and they took him behind the building. Who knows what happened there. We decided to take a taxi home, because walking was a little dangerous for us.
Posted by Tuši at 11:53 0 comments

I arrived in Istanbul early in the morning. I took the Havas from Ataturk airport to Kozaytagi on Asian side and a taxi from there to Moda, where Burcu lives.
In the morning, we had a brekfast with two of her French guests and her family.
In the evening Ana also came from Slovenia and we all went to drink some beers in Taksim area. Before we went home, we ate tongue toast.

It was time again to leave Slovenia and go to Istanbul. Burcu, football, basketball, U2 concert, great food and many things are waiting for me.

It was time to say goodbye to my guests and go to work. I picked up my motorbike. It is fixed now and ready to ride.

At home, we are still doing things on the heating system.
And one video, so you can see what can happen if you don't pay attention on the road.

Patrick, Anne, Mewen, Andréas and me decided to go hiking a little. Our destination was planina Prevala.

When we reached the top, we took a little break and then we continue a little. After a while, we decided to go back. We just caught a Mass, dedicated to all the shepherds in the mountains.
After the mass, we eat something. I ordered ajdovi žganci with kislo mleko and the family had jota with sausage. Our walking path back from the farthest point looked like this. 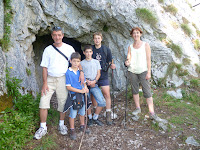 We got back to the car and it was time to see the nearby concentration camp Ljubelj, where a lot of French people were kept. They were digging the tunnel to Austrian side.
We finished the day with a great barbecue, French wine and Slovenian beer and some Medica.
Posted by Tuši at 10:13 0 comments

We removed old heating system and it was time to install new one. First day we just connected boiler with electrical heater.
After the installation I went on a little tour with bicycle. I rode down the village to my ex neighbour Mateja and her boyfriend Grega. They are having a problem with IPTV. We discovered, that the problem is with TV communicator. It has a bad connection with RJ45 connector.
In the evening I received a French family from Brittany. They came to our house as couchsurfers. I gave them an option to sleep in a room or camp outside. They chose camping, so we set two small tents.
Because they were tired from all day driving, they decided to go to eat something outside in Gostilna Ankele. After they came back they went to sleep.
Posted by Tuši at 09:46 0 comments

I took my motorbike to original Yamaha service. I basically had enough of testing what is wrong by myself and without proper tools and equipment.
At home, we finally received a guy, who will change our heating system. The first day, we removed the old system.

I had a meeting with Ana, the only Slovenian girl, who will join me in Turkey, where we will visit Basketball World Championship. And also received a new Hard Disc Drive for my home server. Western Digital Caviar Green with 2TB of storage, model WD20EARS.

Another working day has passed. At home I started to play with FreeNAS server for my home usage.
I will use it as a storage server with an option for remote control.

It was the day for resting after Brno expedition and time to rewatch a movie. Silence Of The Lambs.
Maybe in the future I will have some time to reed the books of Thomas Harris too.

The worst part of travelling is going back, but with help of some beers everything is possible. We finished our expedition in Gostilna Ankele in Podljubelj, where we ate good Slovenian food.

It was the race day. We set the record and we were on the track very early. Around 9 I think.
Our innovation, a beer holder, was very useful. Beer cost 50CZK and we all hope, that it will stay like this for a long time, but we all think, when they will adopt Euro, the beer price will double, just like in Slovenia.
The race itself was not that interesting, especially because Lorenzo won.
We finished the day again on the beach in the middle of the city.