Another great news popped out today. My friend Primož and Špela got a new son, Tine. Congratulations! There was no time to rest, so Nada and me drove to Kokrica, where we made a toast to the newborn. Cheers!

We had to leave a bit early, since we had another event in Šiška, Ljubljana. We decided to watch a documentary about Mi2, currently the most popular Slovenian band, with a title "Kdo je Mi2?"


Yesterday I visited my friend Gašper and I found out, that today he will open his private butcher's shop, so I called our friends and we decided to surprise him. We, or better said our girls, prepared some side dishes (White Carniola loaf (Belokranjska pogača), potato salad and dandelion salad with eggs), we took our camping gear (chairs, tables, stoves, beer, ...) and we were on our way to the shop. At the entrance we placed our gadgets and we went shopping for meat. We bought some Frankfurter Würstchen, Kranjska klobasa and Leberkäse) and we started grilling and cooking and a magnificent afternoon was inevitable.


Since Nada and me were both affected by cold, we decided to take it easy today, so we went out and search for GeoCaches. Villages around Udin boršt were our targets.

Udin boršt is a conglomerate terrace dating back to the Ice Age that lies between Kranj, Tržič and Naklo. Here we can see karst features such as sinkholes, karst caves, abysses and swallow holes. The conglomerate terrace is 10 to 15 metres thick and lies on impermeable Oligocene grey clay. There are numerous springs at the juncture of the two aggregates. Among them the most well known springs are in the water caves Velika Lebinica, Mala Lebinica and Arneševa Luknja with two halls and stalactites, Dupulnek also known as the cave at Zadrga, and Dacar’s and Hišar’s abyss. North of the Kokrica - Naklo road in marshy springs, between peat moss, thrive sundew (Drosera rotundifolia) and mrzličnik (Menyanthes trifoliat). Among trees worth seeing there are the Red pine (Pinus sylvestris) and a group of oak trees by the Novake - Senično road, a linden tree at the village of Žiganja vas as well as the former forest reserve Kriva jelka. An inviting footpath leads through Udin boršt and its surroundings, a short route (1.30 hours) and long one (3 hours), named “In the embrace of nature and tradition”, which was established by the local Cultural Tourist Association Pod Krivo jelko. You can read more about Udin boršt in the book by Borut Mencinger - Naravni parki Slovenije (Natural parks of Slovenia), which was published by Mladinska knjiga in 2004. In the area of the Municipality of Kranj on Kokrica by the rollerblading track and in Letence the Regional Unit of the Institute for the Protection of Nature of the Republic of Slovenia in cooperation with the Institute for the Protection of Cultural Heritage of the Republic of Slovenia set up explanatory boards regarding the memorial park Udin boršt in 2005.


After work I picked up my Black Mamba and we went on a ride from Bistrica pri Tržiču to Bistriška planina, from where we continued on an unkown path to Podljubelj. We were quite lucky with the track, since it was easily ridable.


Our Sport and Cultural society ŠKD Indijanci organized an inline hockey match, our second one. The first one was played 4 months ago in the same place (report). This time we had 4 more players, so it was a little bit easier for all of us.


After the night in Dom pri Krnskih jezerih mountain hut, 1385 m, we left early and started walking towards Krn, 2244 m. We passed by glacial Lake Krn, a a habitat for 40 plant species – mostly algae – and 24 species of lower animals, predominantly small crayfish. Due to the fog and snow, the track wasn't visible anymore so we improvised a little, all the way to the saddle called Prag. We wanted to continue, but our "path" was too icy and without crampons and ice-axes it would be too risky, so we returned back to the lodge. After the warm up tea we returned back to the valley, to Dom v Lepeni mountain hut, 700 m.

2nd day of hiking in TNP

In the valley we started driving towards Podljubelj, but nit directly, since we stopped on many nice places near Soča river, where we found some GeoCaches. 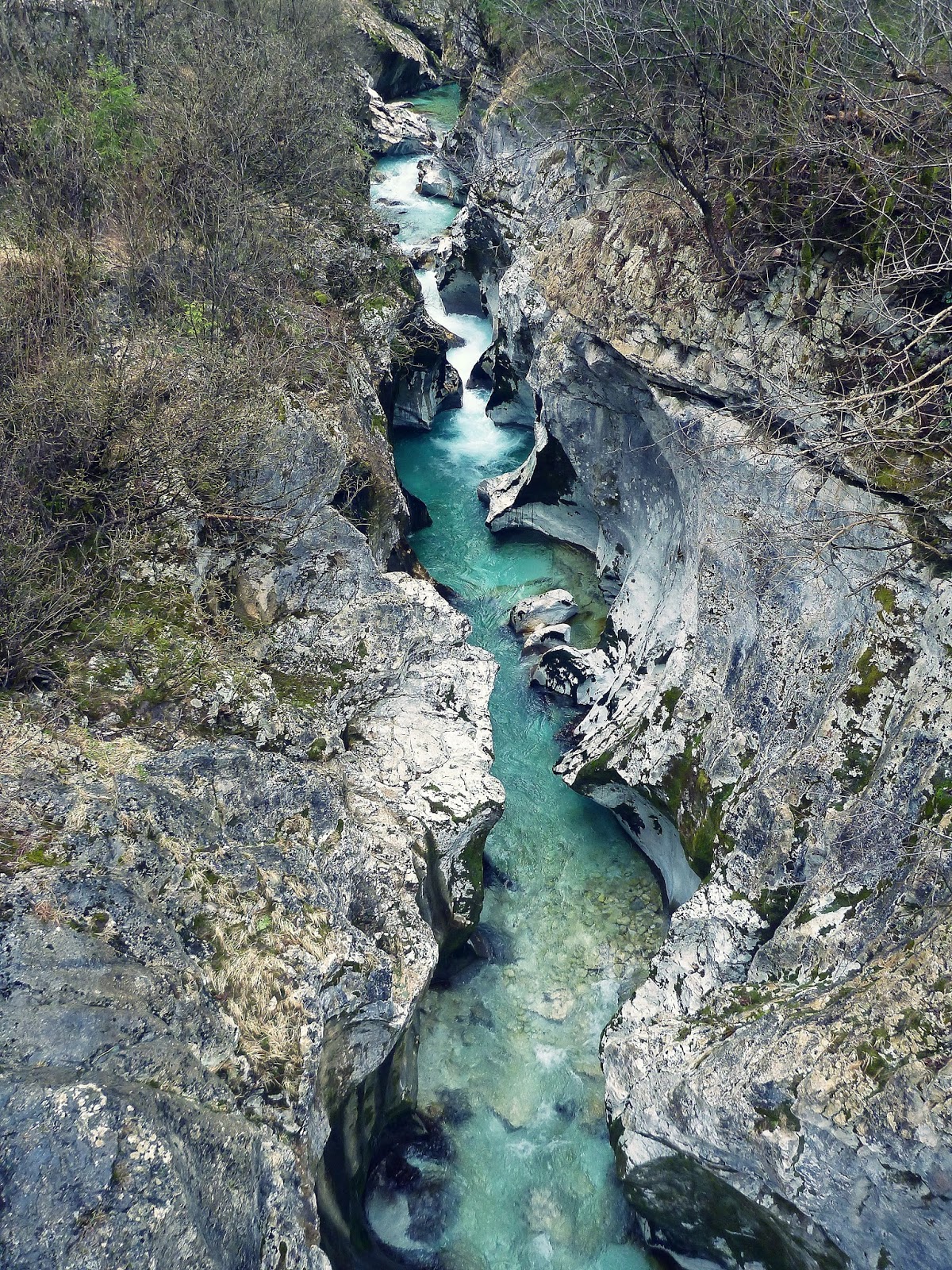 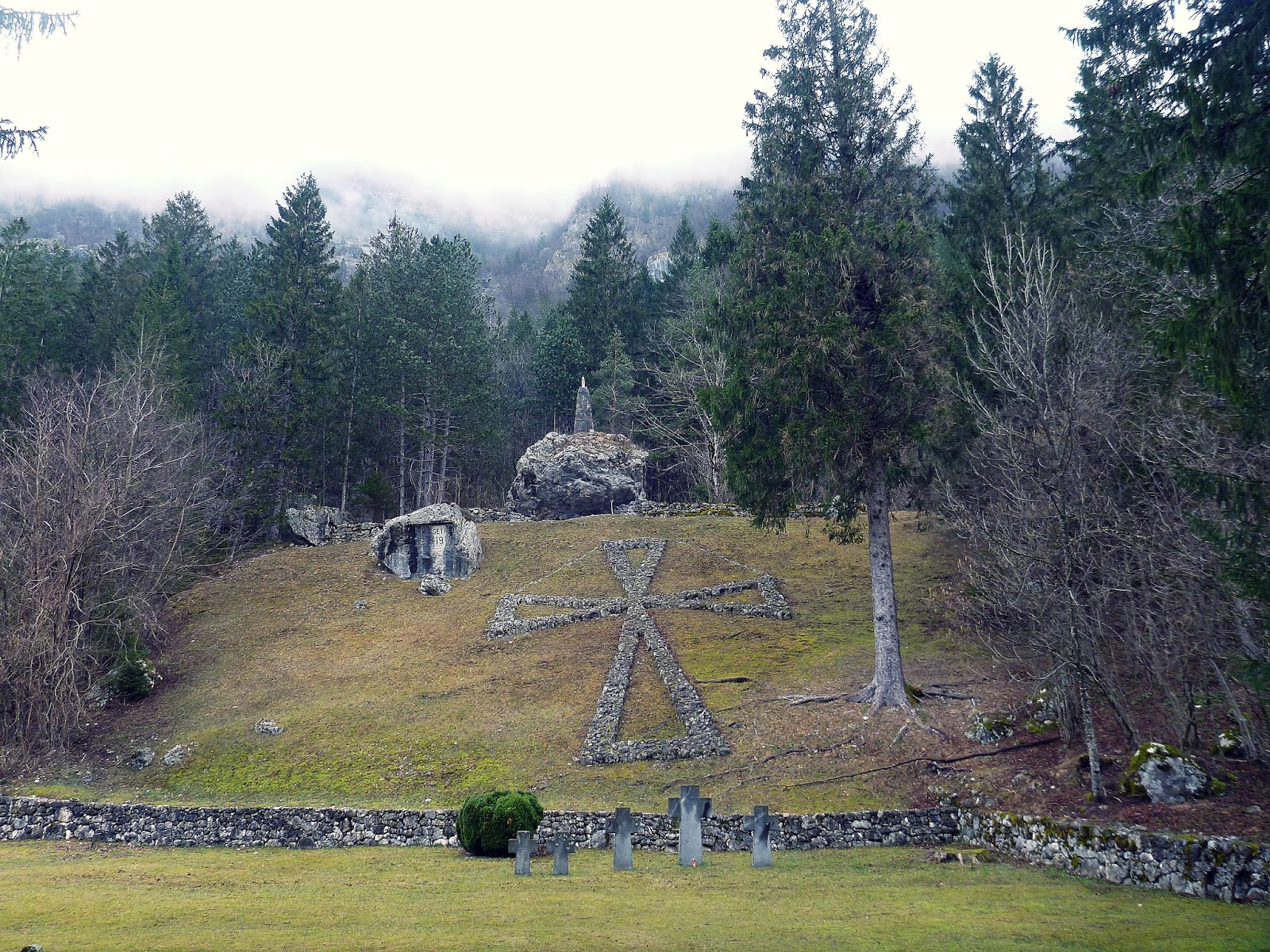 Big Troughs of the Soča river, 750-metre long and 10-to-12-metre-deep, where the quantity of water may vary by as much as 10 meters and one of many cemeteries along the Soča front, where a lot of people died during WW1.


This weekend Nada and me decided to use her coupons for Zip-line, therefore we drove to Bovec, where the guides gave us quick instructions and soon we were on our way towards Učja canyon. 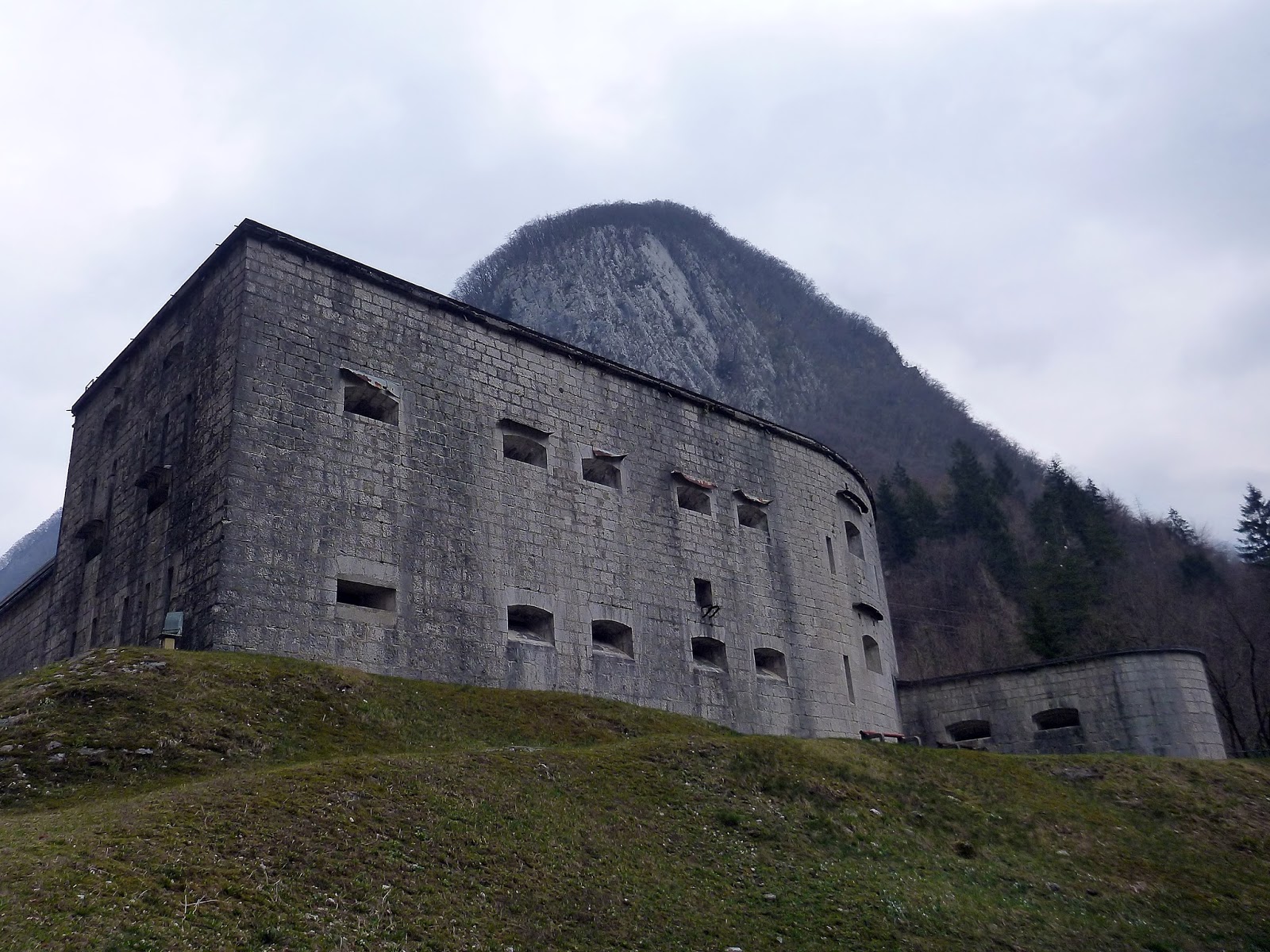 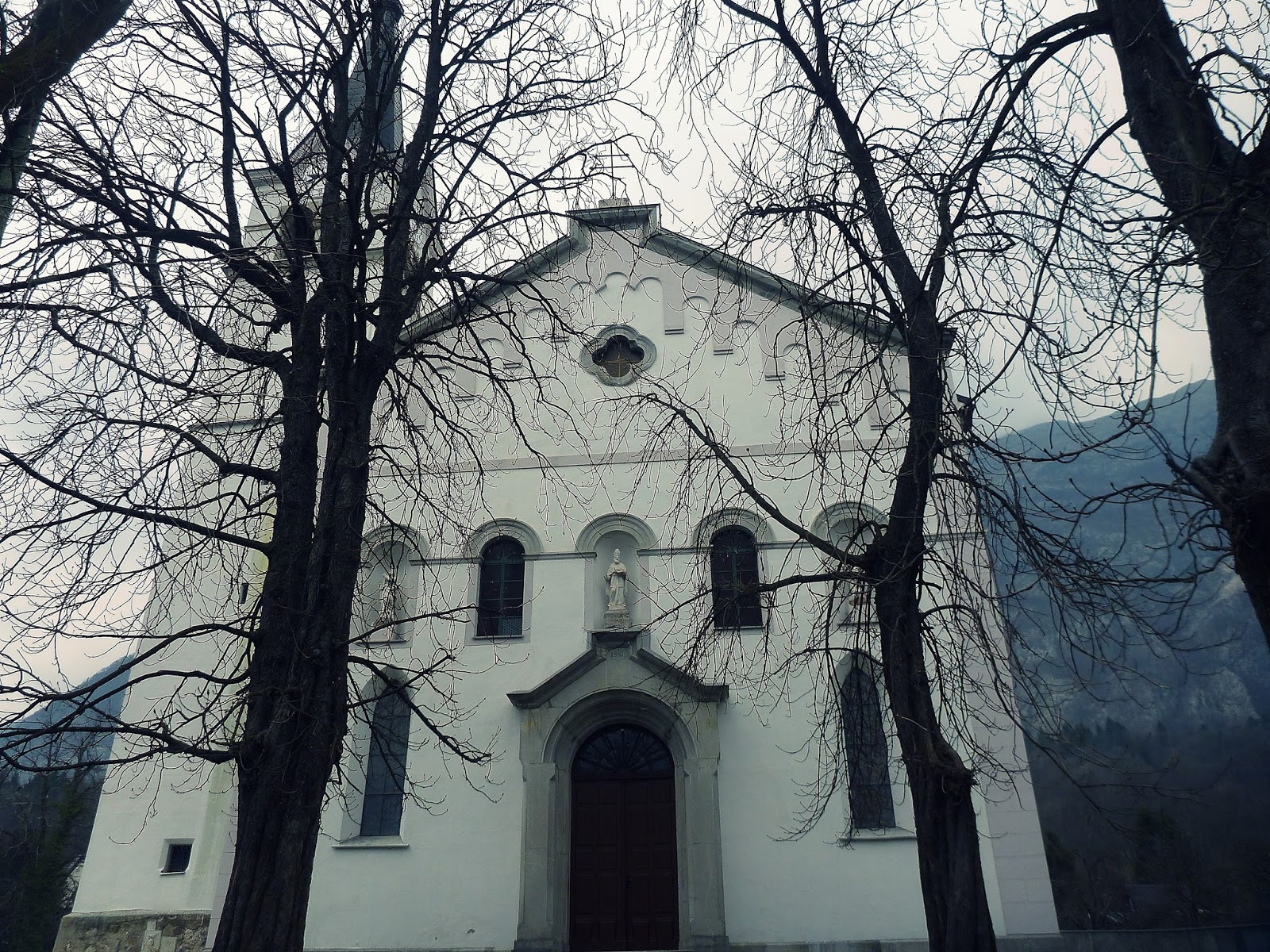 On our way to Bovec, GeoCaches took us to two nice places. First one to The Kluže fort, a majestic fort above Koritnica gorge, that is one of the most visited cultural sights in the Soča valley. It is an important monument to the defence against Turkish invasions, Napoleon's army and attacks during World War One. The second one took us to Bovec, to St. Ulrich's Parish Church. 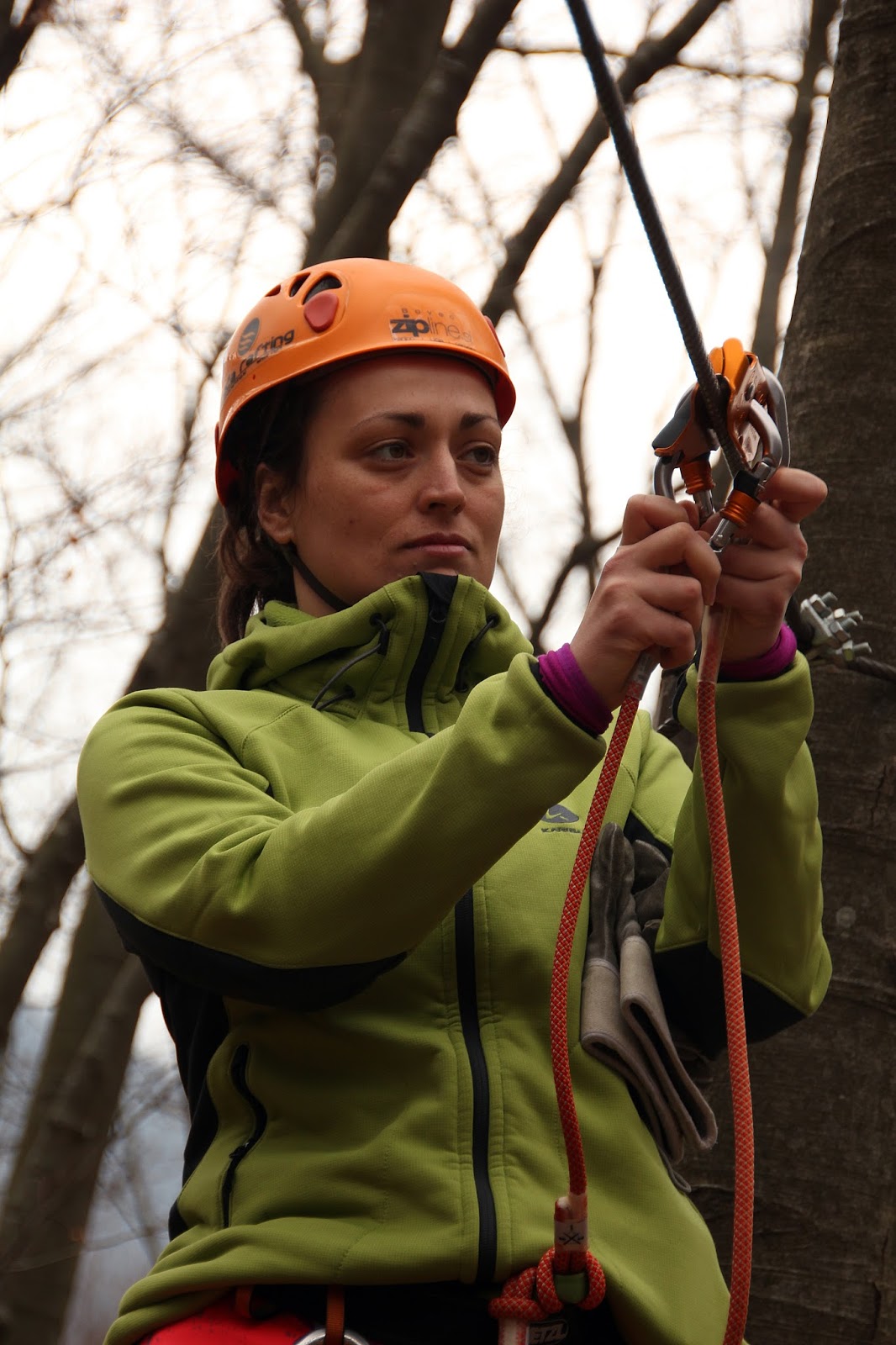 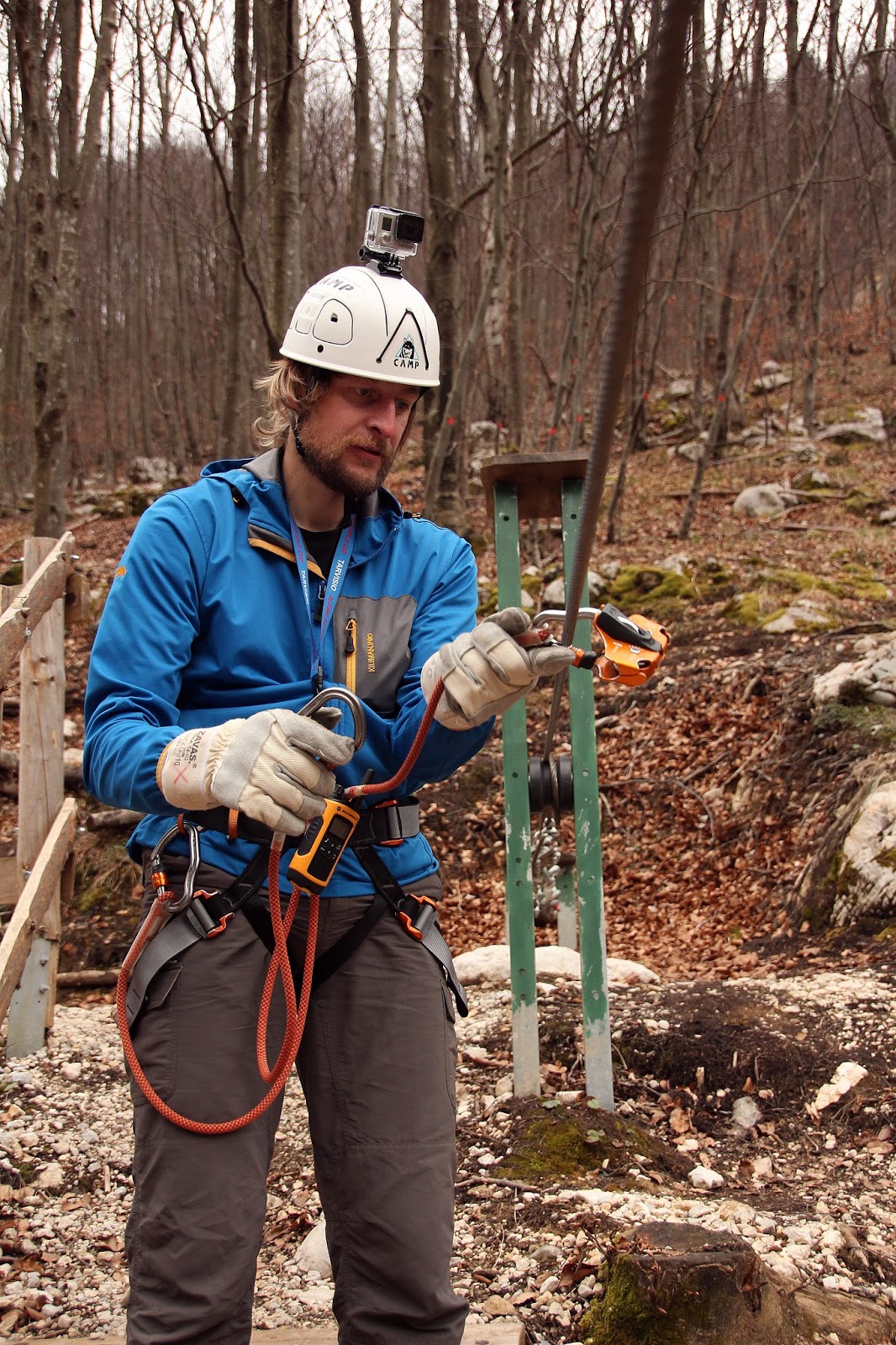 So serious before the start 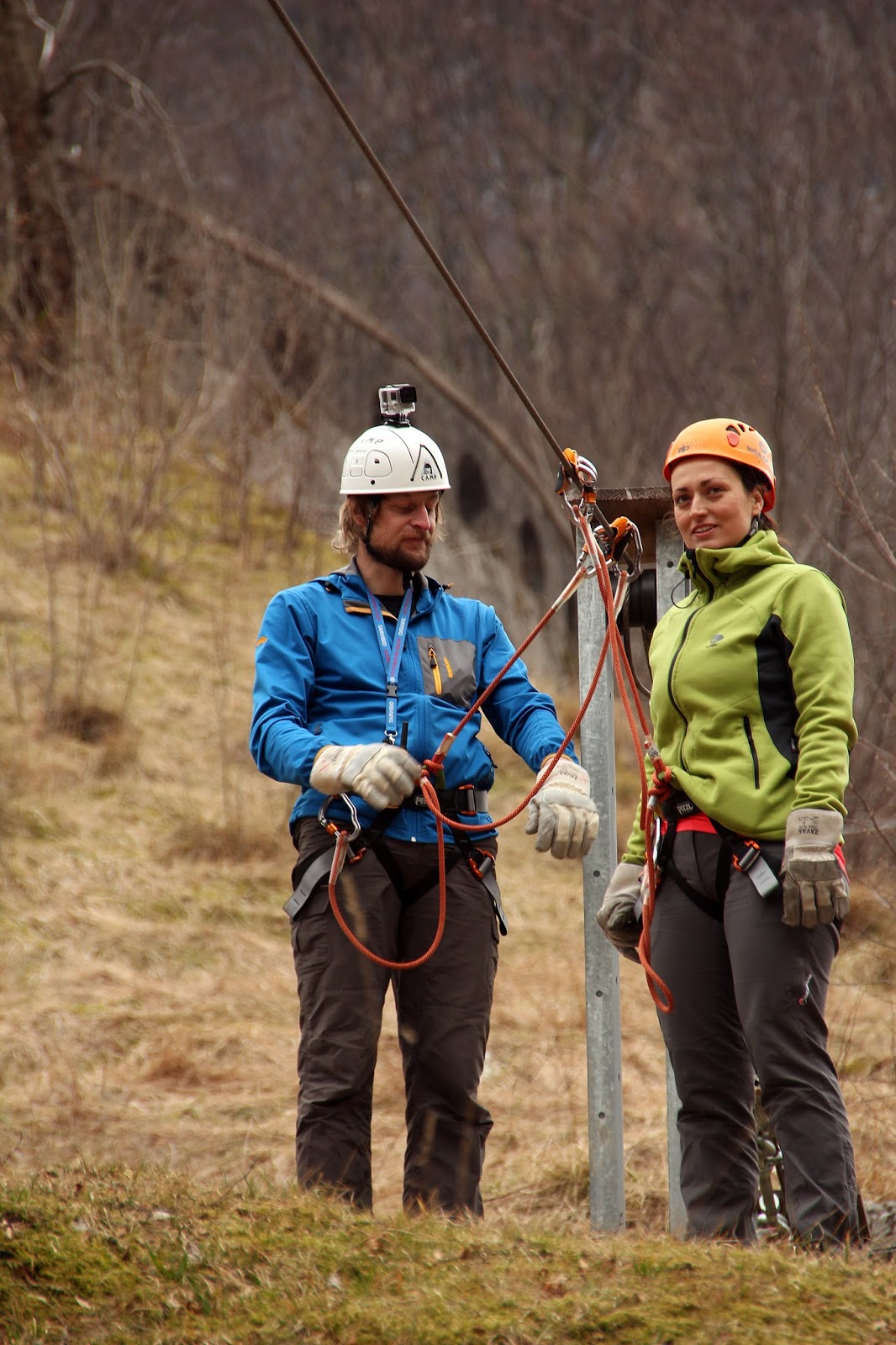 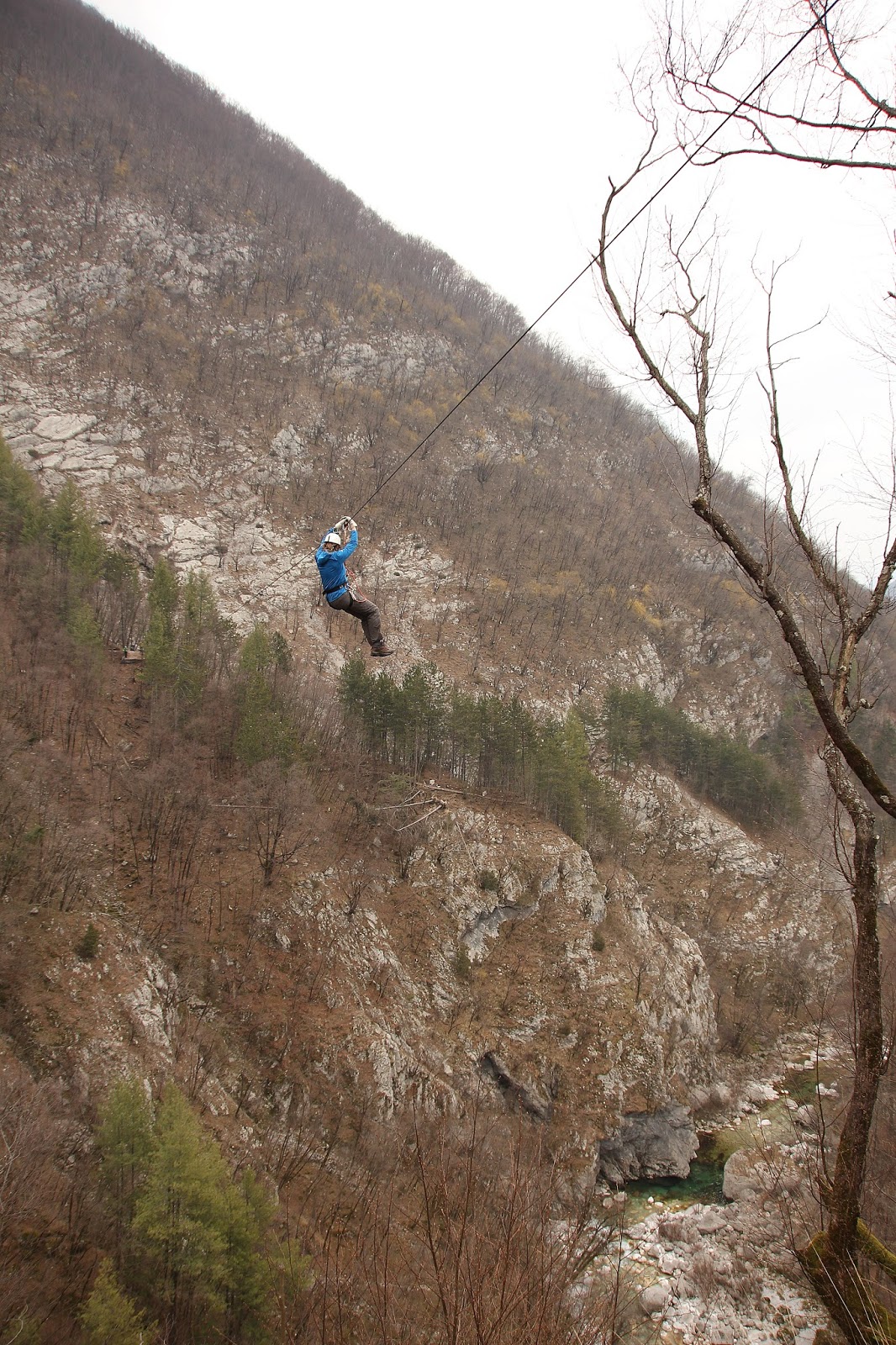 The fun was over in less than an hour, but it was worth it.

Our first adventure was over so we continued with GeoCaching on our way to Dom dr.Klementa Juga v Lepeni mountain hut. 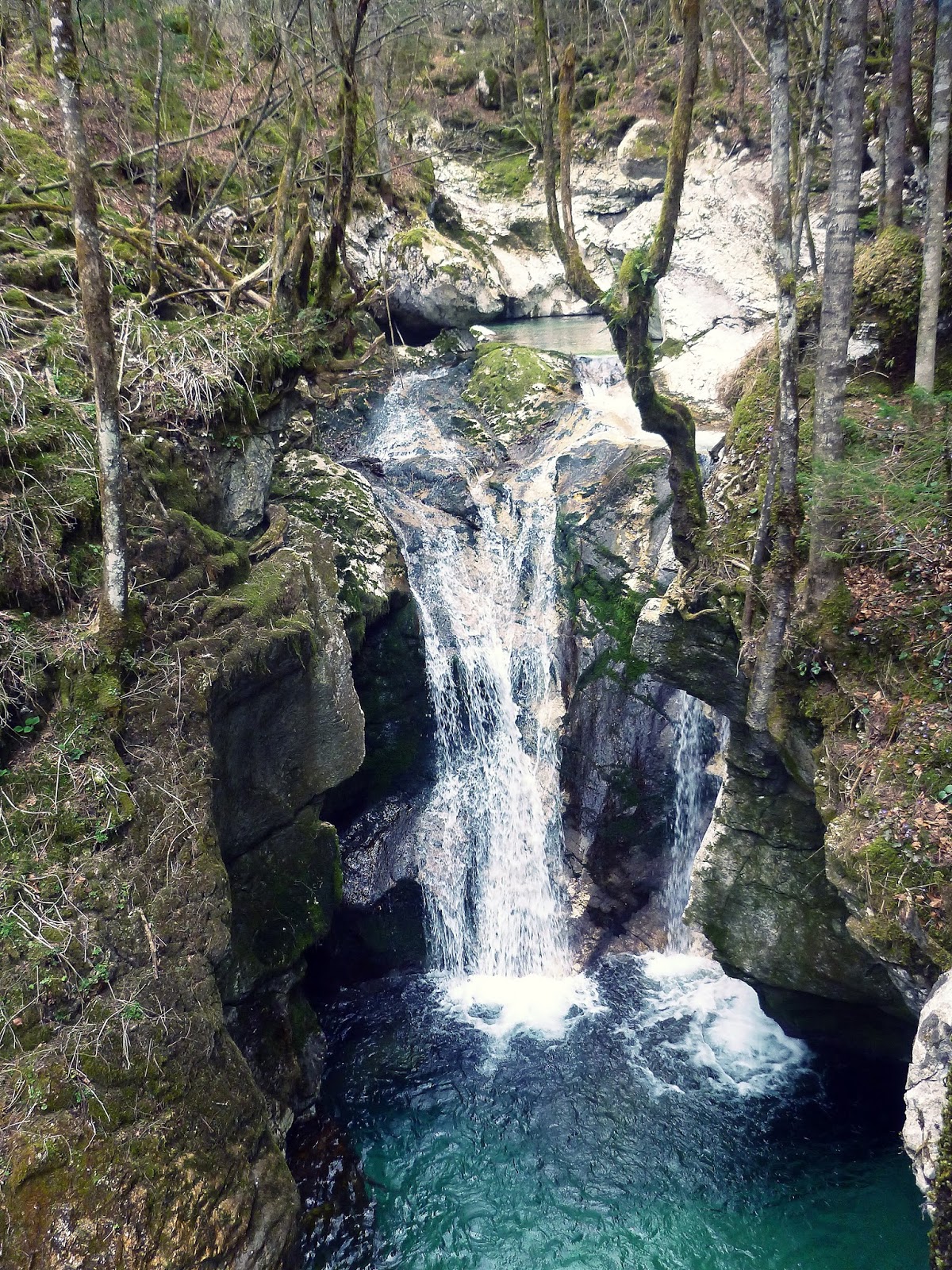 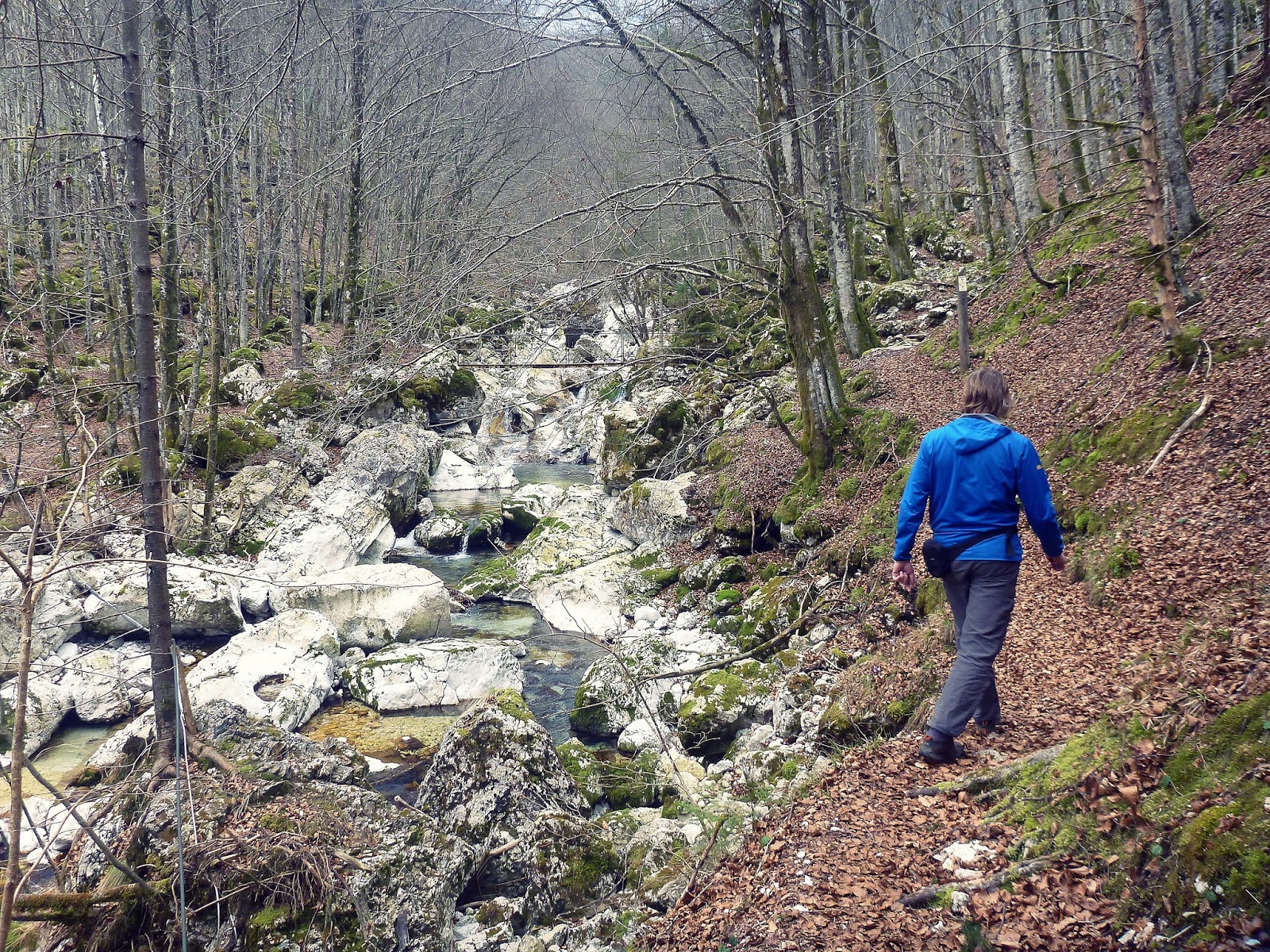 The Šunik water grove, a beautiful corner in the pristine surroundings of the Triglav National Park. Just before the confluence with the Šumnik stream, the Lepenjica has carved out a 100 m gorge up to 10 m in depth with beautiful green pools.


We parked our car and started hiking. Today's plan was to reach the Dom pri Krnskih jezerih mountain hut at 1385 m.


With co-workers we decided to have another morning adventure. Last year we failed in finding the path to Korošaški slapovi (waterfalls), so we had another attempt this time. Rok was our leader and navigator, unfortunately we still didn't totally succeed, so we will definitely have another attempt. 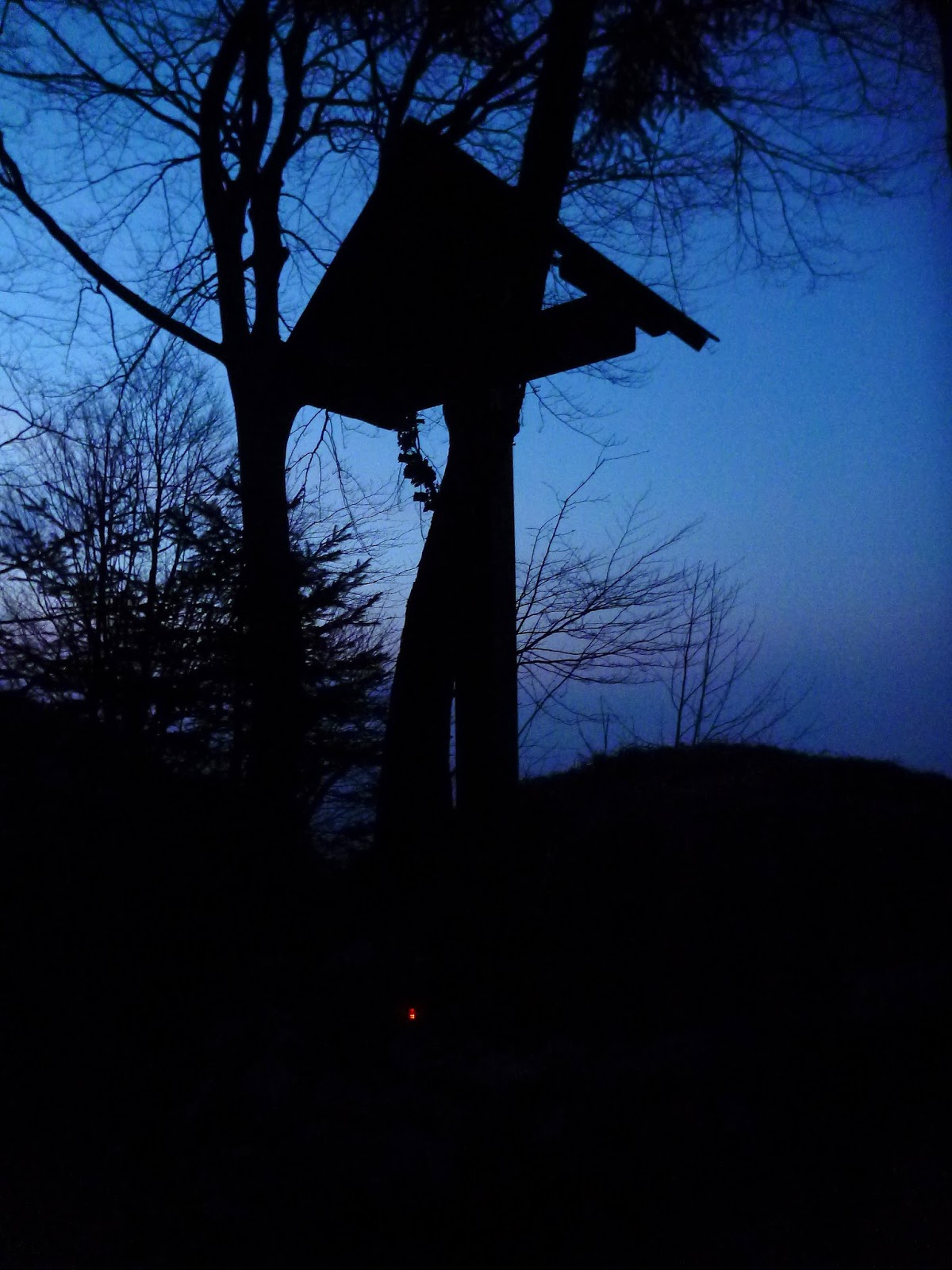 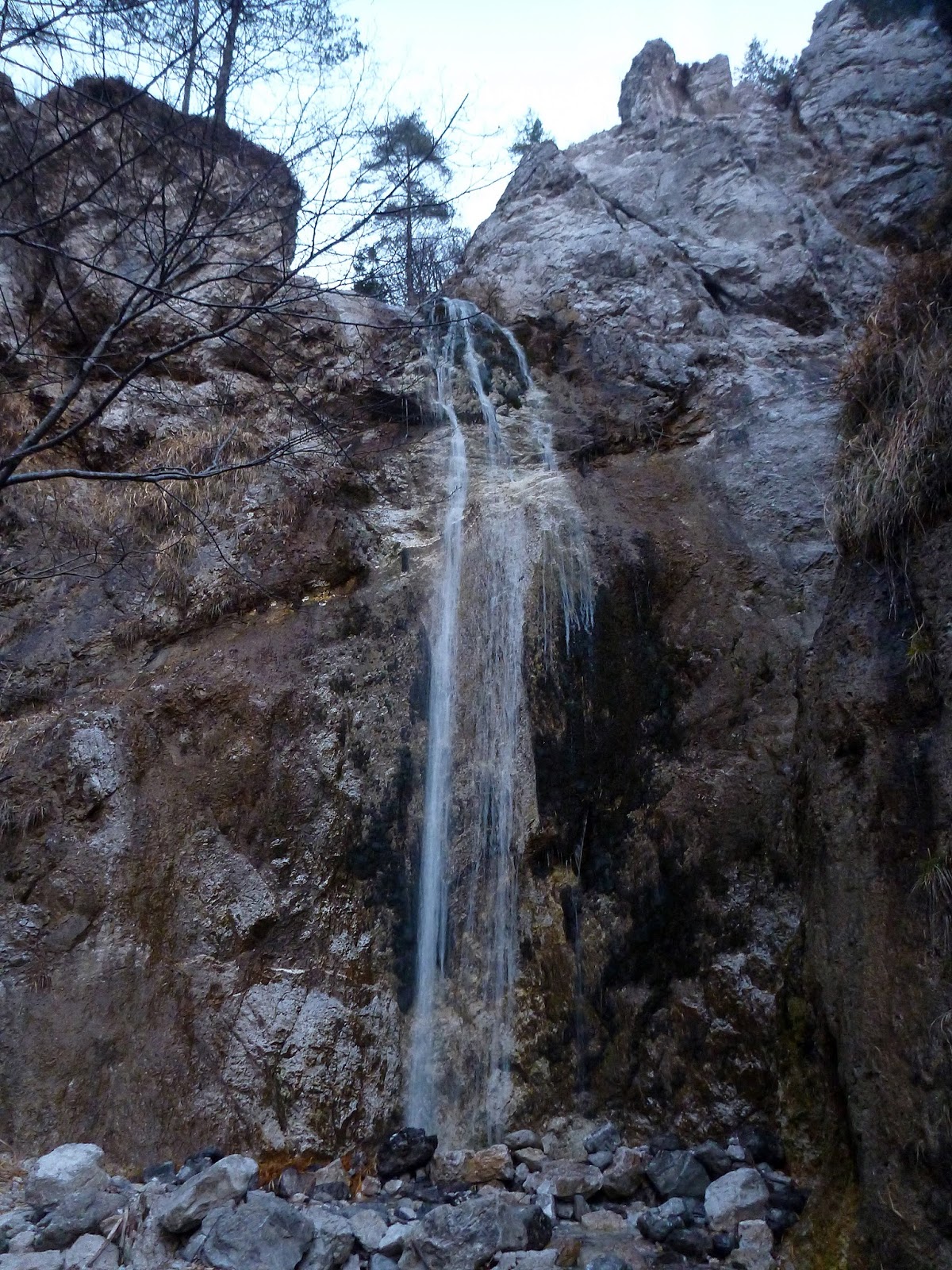 Sign, where we finally find the path today and one of the waterfalls at the top part of the valley

At 10:40:11 we had a partial solar eclipse, that was visible from our company's yard. 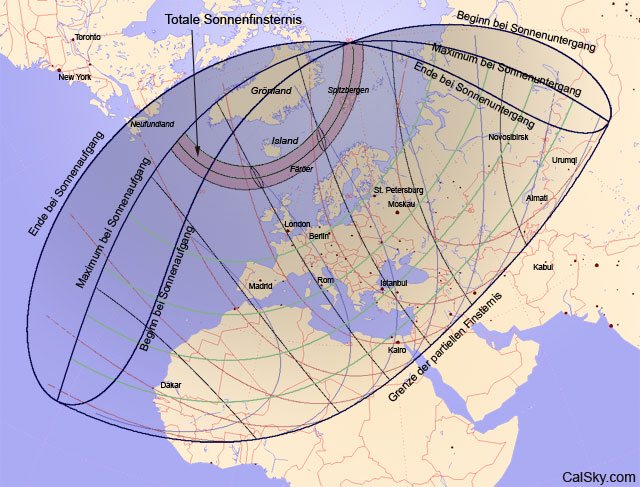 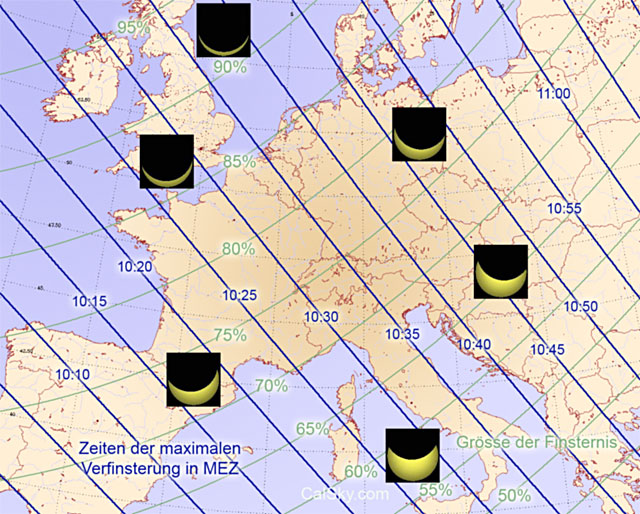 The day still wasn't over, so we decided to go to a concert in a local pub. Paraziti p.13, a local punk band played.