Report by Moshin (http://arabianoffroad.com/), the organiser and my CS host, I just added some pictures:

The weekend began with very interesting weather. I was going to pick-up a Couchsurfer  "Tusi from Slovenia"  at the airport and got little delayed, hence requested Naveen to lead the Convey till Madinat Zayed (MZ).

On my way to MZ and trying to catch up with the convey, I pull in petrol station to fuel up. As it was raining heavy the inter-lock at the entrance of the pump was very slippery and my Patrol skidded side way with both driver side wheels hitting on payment edge and then going over it. A quick inception revealed few thing missing but nothing major that stop me going to Liwa.

We caught up with the rest of the gang at MZ, and after re-fuelling, stocking up and Friday prayers we entered desert form the "Fodder Factory" entrance. Due to heavy rains, the sand was quite hard and it was clear that there are no chances for us to do any kind of side sloping or other stunts that we normally look forward to specially at such places.


However just after 5km in desert, my Patrol started smoking (Ya, ya, I know what you are thinking). A careful analyses by experts (Naveen & Shazad)  revealed that the pipe carrying coolant to the heater has a cut. which in-turn resulted giving my engine a steam wash.

Naveen did a fantastic job in sealing the crack and it was good to go. But knowing the terrain I was bit apprehensive taking my Patrol any further without a proper fix. So I asked Naveen again to lead the drive while I go back to MZ, and get it new pipe fitted. Now as per the new plan I was suppose to meet all them at the camping spot which will be close to Arada- Ruwais road. I also ask Tusi to sit in Amit's car for rest of the drive. 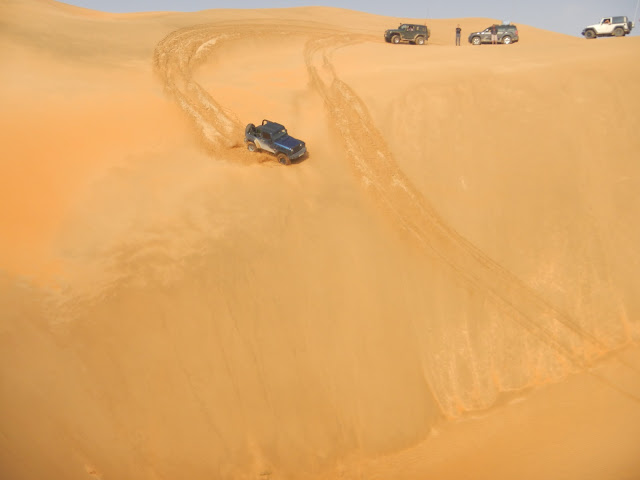 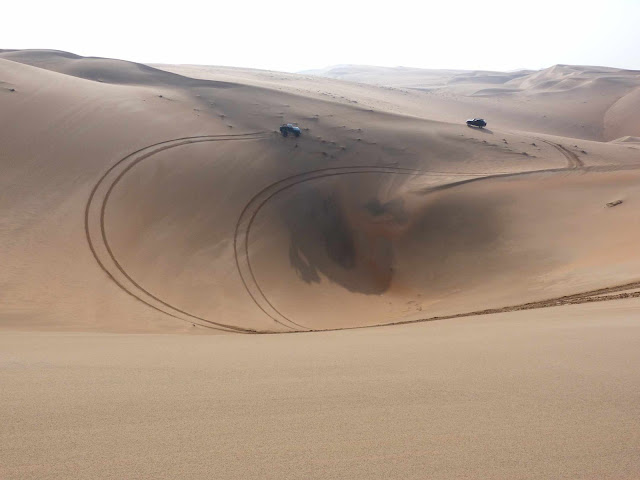 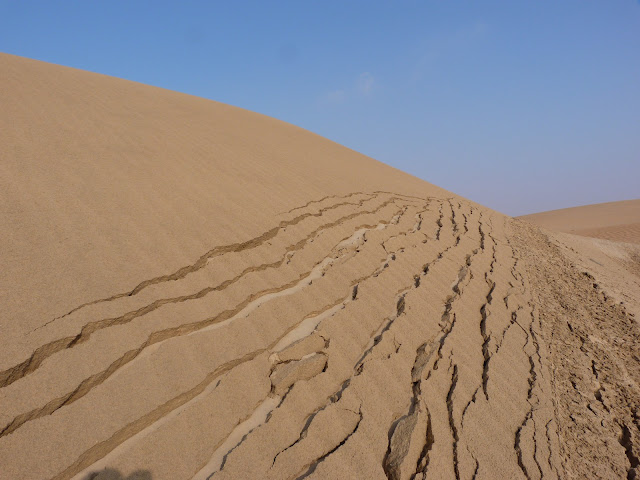 By 3:45pm I was back in MZ cursing down the technical area trying to find the parts and the right kind of Garage. With no luck of getting the parts, I thought of heading on-road to Arada and then to the camping point, of which the Co-ods were  yet to be received.

At about he 4:30 I received a call from Naveen, gave me the unfortunate news with regards to Amit's Xterra. The point of mishap was exactly 30 km from the point of entry. He also requested if I could find a mechanic who can come over to get the car started. So while I was looking for mechanics I requested Sarwar who was also managing his own office crisis at that time, to speak to police for help and paper-work.

Unable to find any mechanic, who is willing to come 30 km in desert to fix a car. I made my way the MZ police station to seek help and do the legal process, which was an utter waste of time as the person on reception advices to call 999, inform about the mishap and let them come to that location to see the car.

In the mean time Sarwar had spoken to few officers at Liwa Police Station who were OK with the idea of we getting the car to the police station for the paper work.

It was important for me to be with the convey and with no help receiving from anywhere, at about 8:00pm, equipped only with my Patrol and a party bucket of KFC (ordered by Naveen) I decided to drive to the given co-ods. I was doing something that I always advice others not to do (going alone in Desert). I switched off my music, said my prayers, turned on all the lights and started. Even after so many years of Offroading, driving alone in that desert at night, with no option of making a single mistake is a scary thought.  Anyways about 9:40 I manage to reach the spot. I was glad to see Amit and Tusi where is a very jovial mood. KFC was still warm and I am sure everybody enjoyed it.

As the night progressed, it got very cold and windy, and my plastic shed was making enough noise to keep me up, however most of us where snoring to glory after a hearty KFC along with so much of other food. 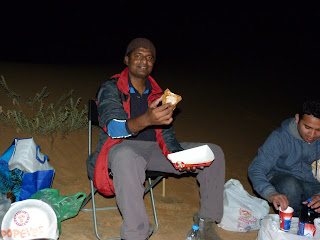 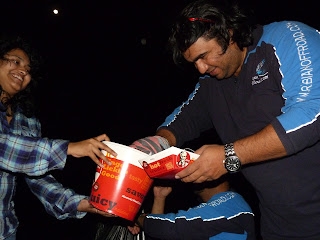 KFC delivers also in the desert

After work a van drove me to Marco Polo airport in Venice, where I boarded flight EK138 to Dubai, United Arab Emirates.

The last one was for family. We went out for a lunch in Pizzeria Pod Velbi, Poljče.

Another party took place in "Karavla" in Podljubelj and many people came with great presents and useful things for the way. THANK YOU ALL!

5th Wine trail in the tunnels under the old Kranj

I went with some friends and co-workers to the event called Wine trail in the tunnels under the old Kranj. Wineries from all over Slovenia exhibit their wines on more then 30 places in the tunnels and by purchasing the ticket you are allowed to test all of them. Great thing worth another visit.

History of The tunnels of Kranj:
Underneath the town of Kranj there are numerous artificial underground facilities that have long ago lost their original purpose and slipped into oblivion, but invite us as works of human hands in a peculiar way to uncover their story. Among them, the most interesting one is the 1300-meter long town air raid shelter, built during the German occupation in the conglomerate promontory on which the old town Kranj stands. Its construction started just before the Second World War and was then restarted in 1944 because of the imminent allied bombing. The work was carried out by two renowned construction companies of Kranj, the company of Josip Slavec and the company of Josip Dedek. The shelter is an important reminder of such construction and a witness of the technical heritage of Kranj during the the war. Access to the Tunnels of Kranj: from the Jelen slope and the canyon of Kokra, behind the Prešeren theatre and below Pungart.


After the wine exhibition we all went to Lager bar, where a band called Odpisani played great rock music. A perfect day.
Posted by Tuši at 22:33 0 comments

We went out for a pizza and a beer in Gostilnica in Pizzeria Korobač.

For 5 years I had my loyal car, Hyundai Accent, 1.3 LS with more than 300000 km. Unfortunately it was time to sell it, so in the morning I took some pictures, created an add and in the evening it was sold for 100€. 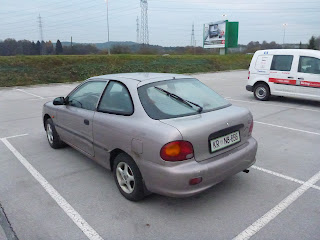 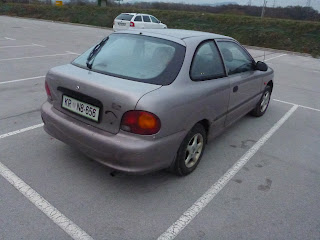 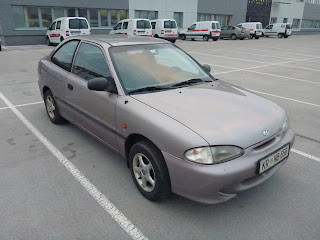 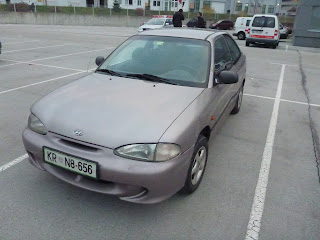 The Ice Hockey tournament began in Ljubljana, paticipants are Austria, Italy, France and Slovenia. We decided to see the match between Italy and Slovenia.

It was still quite windy outside with a lot of rain, so after we cleaned the house, we decided to descent down to the valley.

Our holiday time in Slovenia continued so this time I went to visit my neighbours, who were staying in a mountain hut in Velika planina near Kamnik. In the morning I went shopping and at 8 a.m. I was already on the first cable car towards the top. After a short walk with a backpack with a couple of beers I arrived to the hut. 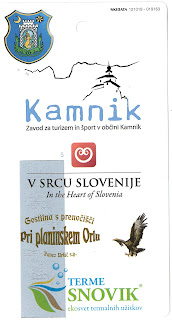 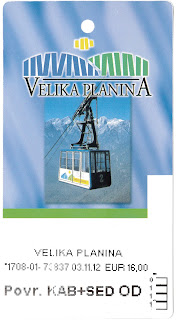 16€ for a return ticket for cable car and chair lift 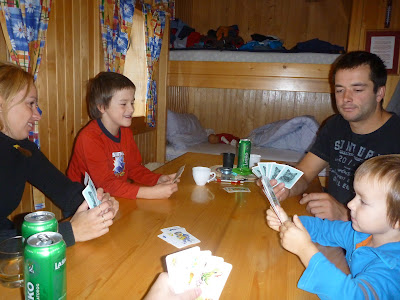 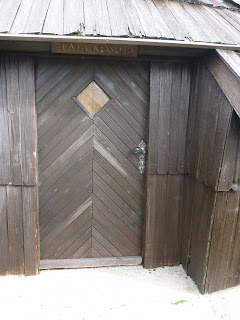 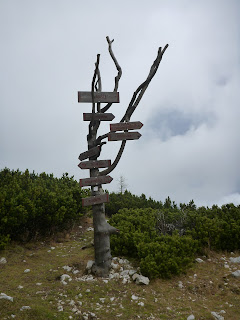 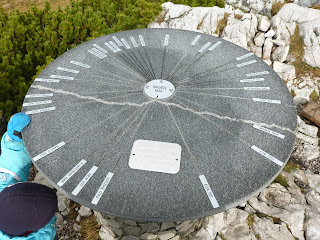 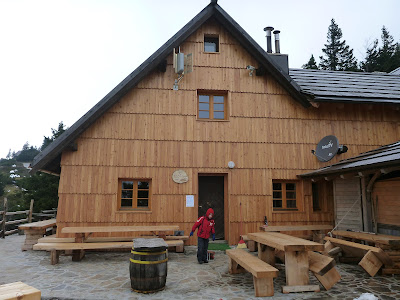 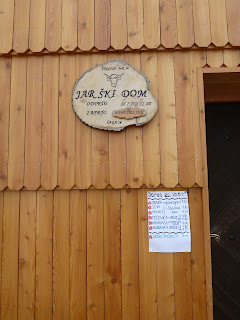 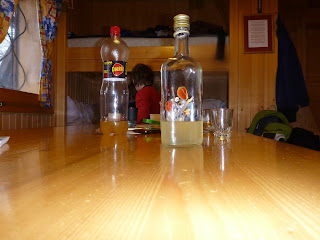 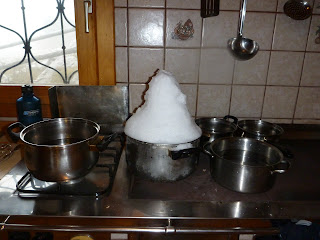 Vitamins and tea preparation back in the home hut

Around Velika planina
Posted by Tuši at 22:28 0 comments