Today we had a birthday party for my neighbour Vid and my co-villager Eva. Since I was not feeling too good, probably because of some food poisoning yesterday, I didn't stay long with them.

We had a wonderful skiing day today in Bad Kleinkirchheim, Austia. Jurko, Vuče, Kralj and me met in Bistrica pri Tržiču, we loaded the car, bought some sandwiches in local grocery shop and started our way to Hrušica, where we bought tickets for skiing and we bought vignette for Austrian roads. Agency Skipass Travell has cheaper tickets, so we paid 27€ for one.

We continued our way through the Karawanken Tunnel, with a total lenght of 7864m, built in 1991 to Austria.
At around 9:00 we came in foggy Bad Kleinkirchheim, we put on our gear and in no time we were already in a gondola lift towards the top. After couple of meters the fog disappeared and the sun came out and we knew, that it will be a beautiful day. 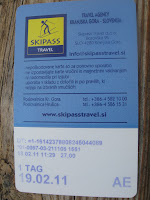 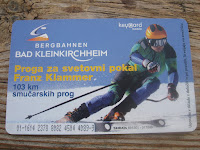 Skipass
Short video taken with GoPro Hero (you can watch in HD)
Our legs started to hurt quite a lot, so we took a short break. We moved into a hut, where we rested and watched Ski World Championship, where girls were competing in slalom. In the end, our girl, Tina Maze was fifth and the winner of the race was Austrian girl Marlies Schield.

It was time to leave Austria and soon we were in our home country. We stopped in Gostišče Koren for a beer and then I had to go home, because I had some work with my home animals. The we took an egg from our small farm with 8 chickens and we went to see our friend Čevka, The butcher. He didn't go with us today, because he went to Croatia, where he bought vacuum machine for meat products. Our plan was to vacuum the egg for a test, but he disappointed us, because the machine was still not connected.
We continued with taxi to Bistrica pri Tržiču where we intruduced our egg to the people.

Today we had a meeting for our yearly expedition to Brno, Czech Republic. We decided that we will go there this year too and see a MotoGP race there. This will be my 4th time. Only 6 people attended the meeting, but I think there will be more people joining us later.

Today, my Burcu left. She took an early morning flight to Belgium.
Posted by Tuši at 18:40 0 comments

After work I picked up Burcu and we went to my co-worker Blaž, where we cooked lunch. I was cutting the onions again.


The main word in our conversation today was word basmati. I must say, that I heard it for the first time. For me this was just a rice, but now everything is different and word basmati is in my vocabulary. I could've said more about basmati, but I don't want to make basmati upset.

After the lunch we picked up my father and godfather and we went to Jesenice to a hockey game, the last derby this season in EBEL hockey league between HK Acroni Jesenice and HDD Olimpija.


It was another exciting game. Guests scored 3 times, but our guys had more opportunities, still they didn't give up and soon it was 3:3. As we were waiting to score the fourth goal, they scored another one and they silenced us, only 20 seconds before the end of the match.

Saint Valentine's Day is another modern holiday and nothing special happened today, except that Burcu and me watched our first Slovenian movie together. Outsider was released in 1997 and it was the movie with most viewers until 2003 in Slovenia, to be exact, 91000 people watched it.
Posted by Tuši at 21:07 0 comments

Sometimes I ask myself a question: "Does name Burcu mean food in Turkish?" The answer is no, but there must be a close connection, since most of the time we eat and today was again a food day.

We went to visit Pirgo, my coworker and his girlfriend Katarina in Ljubljana.
Our chef for today's dinner was Pirgo and he prepared us nice fish. Katarina assisted, and she made baked polenta.
And the week was finished again too soon.
Posted by Tuši at 19:57 0 comments

Today Burcu and me had two events. First one was lunch with some Couchsurfers in Ljubljana, Vižmarje. Our host was David from Great Britain, High Wyocombe, who lives in our country now. Gorazd from Ljubljana also joined us soon.

While we were preparing the food, David's piano was playing some classical music for us. 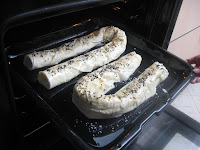 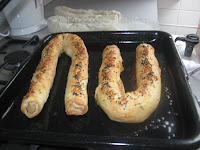 Before and after the sunburn
The lunch was ready, but we were still waiting for Damjana, so Gorazd gave her some woman style directions to David's place, otherwise the food would become cold. Burcu served us nice tomato soup and after that we all ate our first Börek with green lentils. Gorazd also brought us some muscat wine.

After this great lunch, David played one tone on his piano and then it was time to leave Ljubljana. First we went to a shop on our way and we bought some stuff for the evening and then we continued to Bodlaj's house. They were not home, so we joined them at Petra's father house, Drago. We had a beer there and then we returned to Kovor.

We opened another beer and started to prepare things for dinner. First we filled our fridge with beers and then we concentrated on other unimportant things.

Someone even took the video of the greatest kitchen worker of all times. 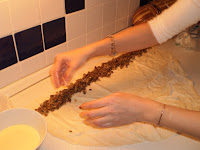 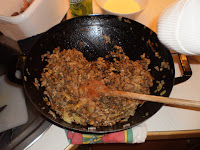 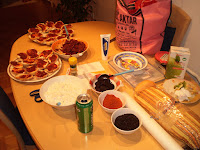 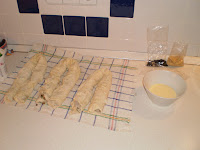 Today I had a typical volleyball friday evening. Burcu decided to spend that time with some of her Slovenian friends in local bars. After the volleyball we met in Roma bar like usual and  since they are now our new volleyball sponsors we drank couple of drinks there. Basically we almost spent more money for drinks in one night then we received sponsorship money.

After a long time, she came, my woman, Burcu. I picked her up in the morning from the Jože Pučnik Airport and then I drove her to our friend Špela in Žabnica. Then I went to work. After work, I went back and Špela, Jurko, Burcu and me went to Mexican restaurant and pizzeria Mlin Mexico in Prebačevo to late lunch. The food was very good and prices are also acceptable. We will come back. 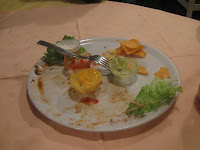 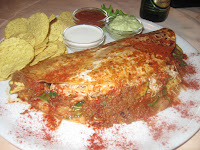