One of my entries in my long bucket list was to ride in The Dolomites and this year I made it. 4 motorbikes, 6 people, nice weather and a smell of an adventure meant, that we will have a great time.

And it all started quite early in the morning, just after the start from Podljubelj, when me and Borut were on our way to the first meeting point. My motorbike started choking just after 5 kilometres. "Yes, yes, I know, you are thirsty" were my words in the helmet. The gas station was only 4 kilometres away, but my Yamaha gave up the last kilometre and it was time for a short morning jogging.

Finally the gas station, where we filled up and later on we picked up Ana, who joined on my back seat, and Mrki, a Yamaha R6 rider. We continued to Lesce, where we had the gathering point. Danica and Primož joined us at this point and we were all gathered now.

Funny thing is, that also Primož had some issues with his bike on the way here. He lost some of his luggage, luckily he found it and this time he attached it more carefully to his bike. 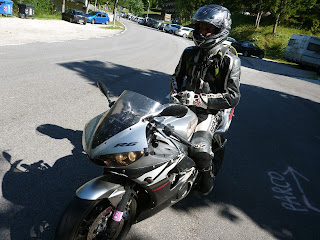 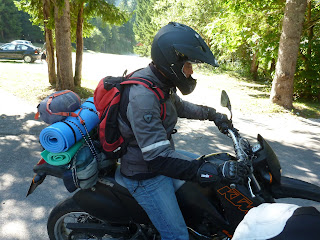 
400 kilometres on our first day in The Dolomites